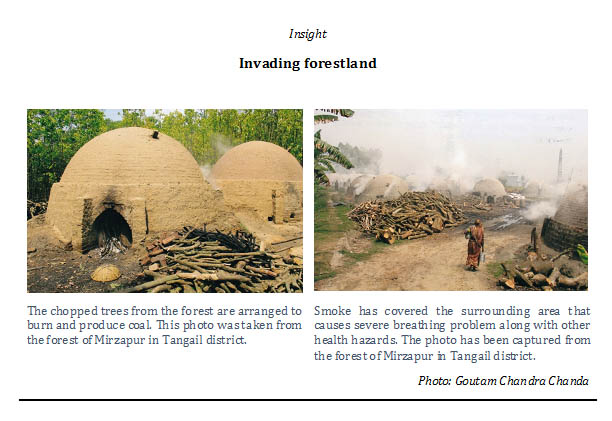 Mirzapur is anupazila in Tangail district. A part of it is covered by forest. In mid-2018, we had identified something is not going right in the deep forest. Hence, some of our employees paid a field visit to Azgana, Torofpur, Gorai and Bashtoil unions to see actually what was happening.

Surprisingly, they found that some malefactors were conducting two illegal activities as businesses in the forest area: cutting trees to feed their coal factories set-up in the forest, and lead production by burning disused batteries.

Perceiving the hazards of such activities, the local inhabitants protested these illegal businesses. As a result, to few places, the involved persons had to discontinue their activities. However, in some villages, people urged the responsible authorities to take necessary measures to cease such anti-environmental activities.

Local people expressed their anger and helplessness regarding the issue since those activities were backing up by local politicians and elites.

We discussed the matters with the involved persons of the crisis afterwards. We tried to convince them to cease their activities in the forest. We further offered logics and evidences to them of how their activities would threaten the surrounding environment. They primarily promised us that they would take measures to prevent the crises. We tried to build awareness regarding the issue and involved the local people in our advocacy program. We also encouraged them to stand against this corruption.

Smoke has covered the surrounding area that causes severe breathing problem along with other health hazards. The photo has been captured from the forest of Mirzapur in Tangail district.

In addition, we brought the matter into the concern of the District Coordinator (DC). We expected his interference in the issue since the local administration remained silent. Besides, we published a press release on this issue detailing what are the circumstances at the spot, how the local publics are suffering and what hazards are taking place. It attracted the interest of few local and national media as well. Nevertheless, reports had been published earlier, no initiative was taken regarding the problem.

Finally, the administration seized a huge quantity of stored coal and demolished 60 coal factories from the forest area on 20 June 2019 thanks to our constant endeavors. This incident is another successful outcome of our advocacy campaign.